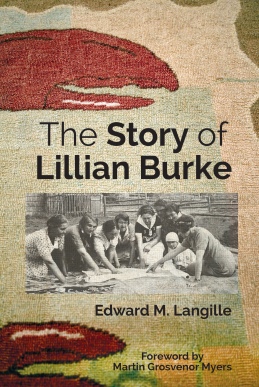 The Story of Lillian Burke by Edward Langille

Lillian Burke, an American artist and artisan, was instrumental in the development of the Chéticamp hooked-rug cottage industry in the 1920s. With the support of Alexander Graham Bell’s younger daughter Marian, “Burkie” as she was affectionately known, breathed new life into Mabel Bell’s Cape Breton Home Industries during the tough years of the Great Depression. Lillian’s innovative rug designs introduced graceful motifs of flowers, birds, forest animals, garlands and trellises, worked in hand-dyed home-spun yarn in a distinctive palette of soft, muted tones. The rugs that the women of Chéticamp created under Burke’s supervision were soon commissioned by the elite decorators of New York and other major fashion centres. Lillian’s 1937 ‘Savonnerie’ carpet’ is considered a masterpiece. It took Lillian three months to block out the 18’-by-36’ burlap underlay; and it took the expert rug hookers of Chéticamp six months and over 125 colours to create what was said to be the largest hand-hooked rug of its time.
The Story of Lillian Burke is the biography of a remarkable woman whose multi-faceted career spanned five decades. Schooled in the tradition of the Anglo-American Arts and Crafts Movement, she wore many hats. She was an inspiring art teacher and an accomplished artisan, as well as a pioneer in the field of occupational therapy, having worked overseas as a ‘reconstruction aide’ during WWI and in later years as a therapist at the New York State Psychiatric Institute.
Until now, her story has never been told.

Edward M. Langille is professor of French language and literature at St. Francis Xavier University, Antigonish, Canada. Educated initially at Université Ste-Anne, Church Point, Nova Scotia, Professor Langille is a well-respected editor, translator and literary historian, specializing in the works of Voltaire. His scholarship has been honoured by the French government, which awarded him the rank of Chevalier in the Ordre’ des Palmes académiques.

Publication of this title was assisted by

Click here to read reviews of The Story of Lillian Burke

Retailers: Contact Boularderie Island Press below for information on ordering this title.