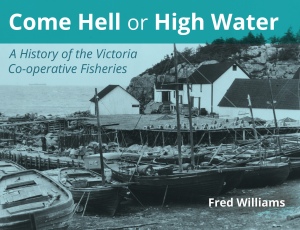 The Victoria Co-operative Fisheries has a way of defying the odds. It was born in 1956 as the fishing industry transitioned from salt fish and canned lobster to fresh product destined for the Boston market. It had to compete with Nickerson’s, Leonard Brothers and F.W. Leslie’s, the Goliaths of the North of Smokey fishing industry, as well as suitcase buyers during the lobster season. In the early years the small co-operative did not meet the expectations of many of its fishermen but stayed the course. After sixty years, leadership initiatives, member solidarity and an enlightened response to industry crises, the Victoria Co-operative Fisheries can claim its place as a major force in northern Cape Breton’s fishery.

Fred Williams grew up in Neil’s Harbour in the 1950’s, a time when the Victoria Co-operative Fisheries was struggling to unite the fishermen North of Smokey. His family has been connected to the co-op as members, directors and employees since 1956. Fred traces his interest in local history to 1975 when he oversaw the creation of the Cabot Archives, located at the then Cabot High School at Neil’s Harbour where he taught for fifteen years. He has published four books: Keep to the Light: a History of St. John’s Church (1992), To Heal Sometimes, To Comfort Always: a history of the care of the sick North of Smokey (with Ken Murray, 1993); Up Country Cape Breton: an index to events in rural Cape Breton as reported by the Sydney Record ­- 1900-1930; A Better Rock: some early history of Neil’s Harbour and New Haven (2014)

Click on the icon below to order directly from Boularderie Island Press:

Click on the icon below to order from Amazon: