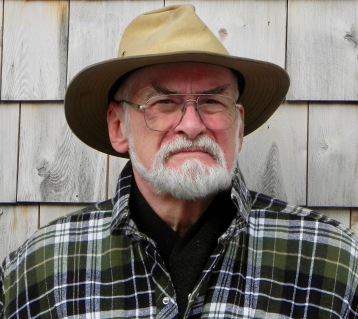 Bill Conall’s novel The Promised Land: a novel of Cape Breton won the Stephen Leacock Medal for Humour in 2014. His earlier novel The Rock in the Water was short-listed for the same award. In the Has Been category, Bill Conall has a significant backlist. Present and former occupations include library assistant, long-haul trucker, salesman (cars, wine, trade show exhibits, commercial printing, encyclopedia, signage), road musician, printer, fork lift operator, bartender, recording artist, and writer. Bill lives on the back side of Murray Mountain in Cape Breton with artist Rosemary McLean. Not completely ‘back-to-the-land’ but close, they grow vegetables, harvest wild things from the forest and cut their own firewood.

Click on the link below to hear Bill read his short story Rainbow.

Reading Some Days Run Long is like taking a leisurely stroll along the aisles of a rural general store. The shelves are stocked with whimsy, humour, ire, reflection, tall tales, and passion. Some of the in-store specials feature rhyming poems that may bring to mind the rhythms of Casey at the Bat or The Cremation of Sam McGee. Signs above the aisles will direct you to Cape Breton, Alaska, Lake Ontario’s Quinte Island and aboard a Mediterranean cruise ship. Animals are welcome here so don’t be surprised to meet a grizzly bear, fox and a crafty raven. And like any good general store, whatever you need, you’ll find between the covers of Some Days Run Long.

Click on the icon below to order from Amazon

WINNER OF THE 2014 STEPHEN LEACOCK MEMORIAL MEDAL FOR HUMOUR!

Like the tides that have washed her shores forever, the story of Cape Breton has always been one of comings and goings. Native peoples came here while Europeans were still living in caves. In 1820, the fiery Presbyterian minister Norman MacLeod and his flock settled in the St. Ann’s Bay area, and their presence is still felt in the communities that line the shore six generations after many of them left, bound this time for New Zealand.

The Promised Land begins with the arrival of a small truckload of hippies in 1970. Moving against the tide of young people leaving Cape Breton, they are eager to get back-to-the-land. They are also grubby, scrawny and broke, and in this regard are not unlike those original Scottish settlers who preceded them. There are stories of humour and pathos as the newcomers and the locals adjust to each other, culminating in the legendary hippies’ ceilidh.

Four decades later, another new arrival crosses the Canso Causeway to begin her career as a medical doctor at a clinic in Baddeck. And on his first-ever trip outside the Boston States comes loud, brash, 78-year-old Gavin Mercer to visit on his niece’s little farm in Indian Brook. Young Gummer MacInnes, grandson of one of the original hippies, forms a friendship with Black Angus MacDonald that results in a brief spark of worldwide fame for both of them.

Through the adventures of his characters, Bill Conall’s story is told with humour, kindness, insight, and with the gentleness of touch that can only come from a writer who loves his subject.